The team of Marvel’s first superhero show talk about its sitcom-inspired narrative structure, and entering Phase Four of the MCU in some style

In the beginning of the show, the two superheroes appear to be madly in love, married, and trying their best to live a normal life. But wait; the mini-series sees the format change in every episode, jumping from decade to decade, along with all the classic TV tropes associated with the zeitgeist of that particular era.

Also Read: Get ‘First Day First Show’, our weekly newsletter from the world of cinema, in your inbox. You can subscribe for free here

Each episode is set in a new decade, and the mannerisms, dialogue and costumes of all the characters also transform accordingly: from black-and-white to colour, from I Love Lucy to Bewitched. Heck, there are even Hydra (!) commercials thrown in between episodes for good measure.

If all that sounds a tad bit confusing, don’t worry — Wanda and Vision are as puzzled as the audiences. Are the two locked in an imaginary prison within their minds after the traumatic events of Avengers: Endgame? Or have they been transported into an alternate reality? Will their seemingly-perfect world be disrupted by the emergence of foes, old and new?

Directed by Matt Shakman and written by Jac Schaeffer, the experimental, ambitious project aims to keep viewers guessing until the last minute, and actors Paul Bettany (Vision) and Elizabeth Olsen (Wanda) aren’t giving away too many spoilers.

Joining the stars and filmmakers in a quick chat is also Kevin Feige, President of Marvel Studios and chief creative officer at Marvel. Excerpts from a Zoom press conference:

Interpreting the characters in this experimental scenario:

Elizabeth Olsen: We shot the first episode in front of a live audience, so it was nerve-wracking and there was a lot of adrenaline. There were a lot of quick changes, and it totally confused my brain — the idea of not playing to an audience, but feeding off an audience and having a camera. I was really grateful when we added the fourth wall for our second episode. (laughs)

As far as my exaggerated mannerisms for playing Wanda in these different eras goes, it was like an amalgamation of Mary Tyler Moore and Elizabeth Montgomery. I think I accidentally threw in some Lucy in the 70s, just because there was so much physical comedy.

I believe from Wanda’s point of view, she would describe WandaVision as a family sitcom of two people trying to fit in, and not be discovered for being different. 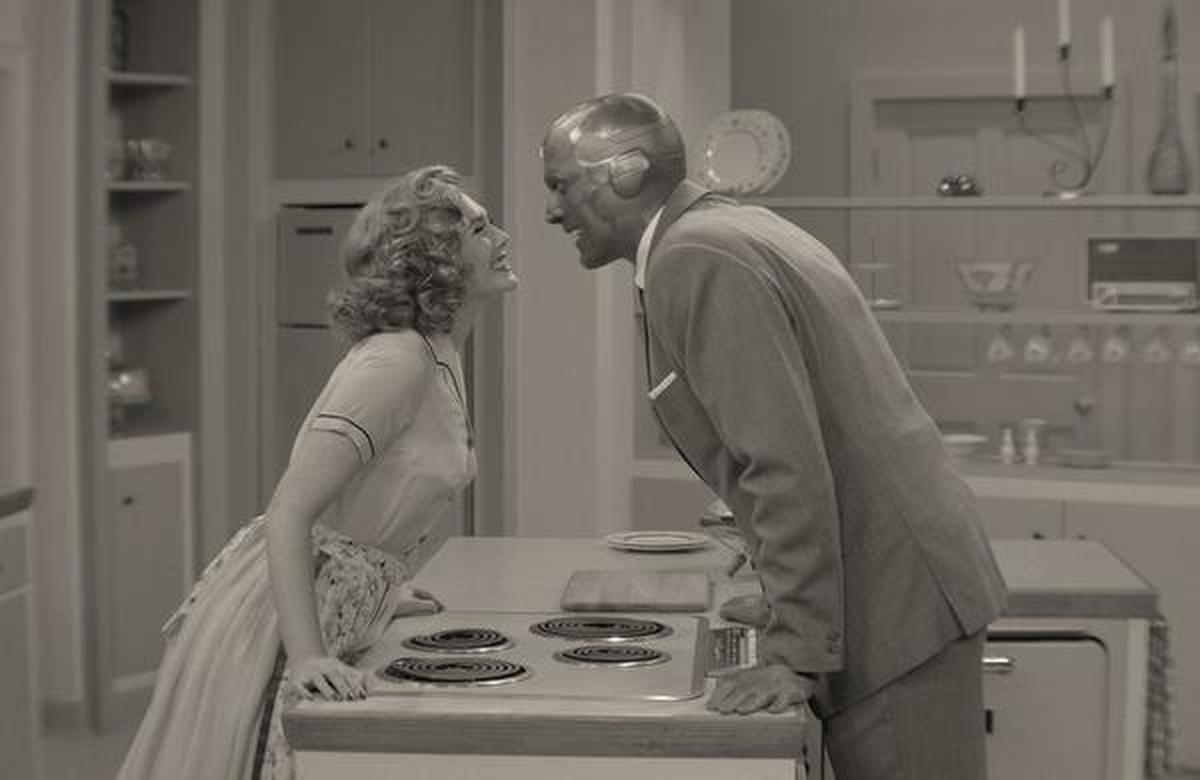 Paul Bettany: I was like, “Wow, this feels so different,” as I read the script and thought about how to keep Vision the same? And then I understood he’s always been becoming something else, you know. He’s Jarvis, he’s part Ultron, he’s part Tony Stark, and he’s omnipotent, but he’s also this sort of naive ingenue.

I realised I’ll just throw a little bit of Dick Van Dyke in there and a little bit of Hugh Laurie. So, as long as he remains… what Vision is, he is just decent and honorable and exists for Wanda, and then you’re safe.

Kevin Feige: We often talked about, when we were in our period sitcoms, that when something shifted from say a Dick Van Dyke style, into something that was outside of that… it was going into kind of a Twilight Zone. We were thinking about what were the period shows that addressed the odd and the strange, and how we could embrace that.

How Wanda’s powers transform, specifically, in the sitcom world:

Elizabeth: Well, I can’t wiggle my nose, so we had to figure out something else that was period-appropriate. (laughs) This was our translation, and we watched our special effects team that usually blows things up, sets things on fire, creates wind and smoke… these guys now became puppeteers of things floating in the sky and dealing with magnets, different ways to make things spin and so on.

It was just so incredible to watch them adapt to specific ways of creating these practical effects, by doing the research of what they did on shows like Bewitched. It was really fun to have the practical effects there.

Physically adapting Wanda and Vision to the different time periods:

Paul: I think there is a lot more slapstick and physical comedy early on. Luckily by the time we get to the 90s, um, they’ve all made me look so ridiculous that I didn’t really have to work that hard for the laughs, I think. Elizabeth: The way women move throughout the decades changes so much when it comes to what society wants from them. Jac did write in quite a few nods to how those were evolving through the decades. In the 60s, she (Wanda) gets to wear some pants, and that would adjust how someone moves through space. When we talk about vocal work, speech and cadence, manners were a huge part of every decade — so we would get this book of manners for the time as well!

But we also have to remember that we’re not depicting an honest reality of the 60s or the 70s. We are depicting a reality, which has its own set of rules.

Kevin: With WandaVision, Phase Four will get ready for the new and the different. I hope all of our movies have said that, one after the other, over the years.

This was Marvel Studios’ first foray with cast and amazing characters that we’d seen in movies, coming onto television. The idea was always to do something that could not be done as a feature, which plays with the format and the medium. There were a lot of meetings before people actually sort of understood what we were trying to go, and we’re only sitting here because Jac (head writer) and Matt (director) did. We were able to turn a wacky idea into a spectacular show!

Yes, the original plan was for Falcon and The Winter Soldier to debut first, last year, followed very soon by WandaVision. But creatively, it didn’t reshuffle too much. I’m not saying we were prepped for a global pandemic. But we have always had the ability and the ideas on how to shuffle should the need arise.

The unexpected has often served Marvel Studios well. And it has served us well in this case, because this show being our first one, I love how bold it is, how different it is, and it is something you could only see on Disney Plus.

Monkeypox: WHO to look into reports of virus in semen